Hello to my readers

The Understanding Loomis blog is going to pause for the next 30 days.  Fortunately, regular blog entries are not going to be pausing though.

Today, I am embarking on a slightly different project which I will post about here, in order to keep track of the progress, and record the event.

I am taking on a project inspired by a series of Youtube videos produced by a man named David V. Stewart, and his colleague Matthew J. Wellman.

These men are authors of science fiction and fantasy, as well as deep fonts of knowledge and information regarding the aforementioned genres generally.  I have read one short selection from both authors, and the writing in both of their works is both engaging and well done. Their internet media content ranges from musings on Hollywood movies,  to technical considerations for writing novels, through political and philosophical commentaries, and even into music theory and practical instruction lessons.  They produce very intelligent Youtube videos as well as a podcast called “Writers of the Dawn”.

Their author sites on Amazon are here:

In one of their presentations, they introduced a concept they called the “bootcamp” philosophy for writing a novel.  The idea is that given a constrained time frame, a person could be remarkably productive and achieve a single very large, set goal -despite the strain of working long hours.  The key of course being that the person acts rationally, and makes for themselves a schedule in which the goal is broken into manageable steps, constrained by time, and is something achievable relative to their abilities.

In this format, David V. Stewart was able to write a full novel, from conception to publishing in 30 days, which he did for National Write a Novel Month.

I became inspired greatly by these two authors, and have decided to complete a similar feat -to conceive of, script, pencil and ink a full comic in 30 days.  My wife suggested to not to try to do the lettering and colouring in that time frame, which after considering the rule of having the task be “achievable relative to one’s abilities”, I decided she was right.  I will colourize and letter it though, after the thirty days, then publish the comic.

In this blog, I will post the daily work I have done.  The script is original, and is called Strange Tales: The Trial of Ingretta.  It is going to be a pulp-style comic, set in 1928, with proto-nazi women warriors, ancient cities, prehistoric beasts and a giant ape who wears a crown of gold…  Here is page one!  Pencilled and inked by myself in one day.

This is Ingretta, and she and I are going to have a tough 30 days ahead.  Get to know her!! 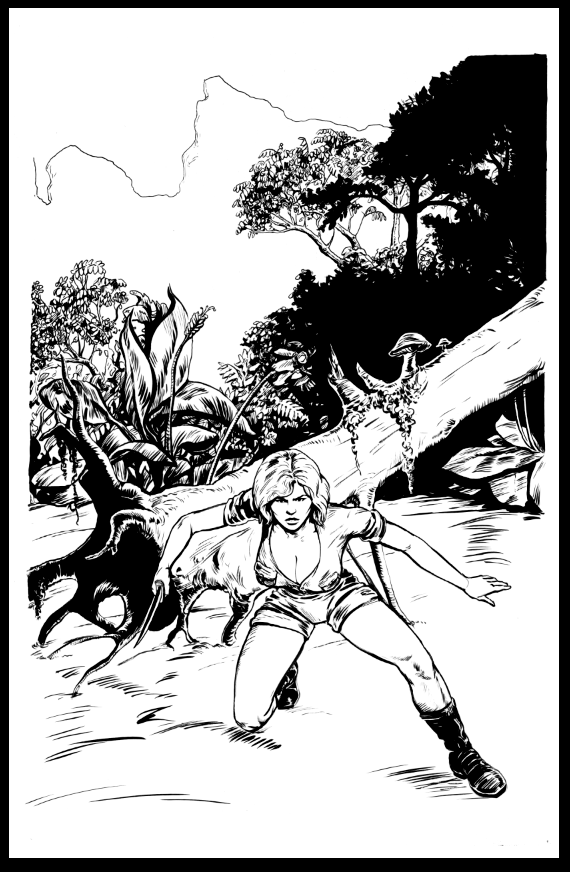 One thought on “Bootcamp Comic”