Welcome back to my overview of Andrew Loomis’ book, Successful Drawing.  In this posting, I am going to move into the territory that all artists need to understand, that is, how to light an imaginary object in space without reference.

Most lay people call the effect of light on form shading.  This is not a good term to use, and Loomis encourages his readers to abandon it immediately.  The reason being, is that such a conception takes into account only the shadow element of the phenomena.  In actuality, the artist should be concerning himself with the light more than the shadow.  This is a subtle shift of mind, but a meaningful one.  The term Loomis prefers is modelling.  This new term implies a process of sculpture, and he argues that this is how we should represent light on a form.  Loomis asks us to recognize the shadow of a form as no more than a tone governed by the value in the light.  To sculpt is to consider form in three-dimensions.  We illustrators must think in those terms also, if we are to represent light realistically.

Loomis expands on the point regarding  lay-viewers of art.  Such folks generally regard the rendering of form with light as a feat little short of miraculous.  The naive and lay viewer is likely to speak of the artist’s great talent and how lucky they are, to have been blessed with such a gift.  The truth is that most viewers of art are unable to distinguish talent from plain observation and knowledge.  The lay-viewer has never really analyzed the way light works on form, but again, his intelligent observation recognizes and accepts the proper effect.

To represent forms from imagination, one need not attempt to memorize all the various shapes and ways objects cast shadows found in the real world.  Such an attempt would be foolish and impossible.  The technique Loomis outlines is much more reasonable than that, and something anyone can master so long as they attend to the practice.

Nature, until her way and laws are understood, can seem so complex as to be almost overpowering.  Usually her forms are surfaces with endless variations of texture, and the relationship of her form, as well as of man-made form, to basic form is not always evident. So some simple plan must be devised to help us understand the complexities before us.

Here Loomis declares again the main thesis behind his books.  That thesis, plainly stated is that the world is understandable, and can be classified.  To do this, one needs to create a meta rule:

REDUCE COMPLEX FORMS TO BASIC FORMS IN ORDER TO CLASSIFY

Such a rule will act like a guide through the chaos of possibility, and with one rule, the learner will begin to comprehend futher rules.  This will allow the illustrator to find his way through the multitude of impossible choices when representing nature.

The first rule for learning light on form is this:

Memorize the way light falls on a sphere.

Light falls on a sphere in a totally predictable way, with no variance.  To heed the rule is really only to make this observation: On a lighted sphere, there is a highest point of light, where the surface is nearly flat or at right angles to the source of light.

That’s a simple fact.  Add to it, that the point of light on a sphere appears as a circle, and that is all we need to know in order to light the sphere.

Consider,  the remainder of the modelling phenomena (as in the new moon, the crescent moon, the waning moon etc)  follows from the basic principles of form particular to the sphere.  As the sphere curves in relation to the light source and our point of observation, how we perceive the circular spotlight changes.  As the surface of the sphere curves away from the source of light, it collects fewer rays, and is observed as a halftone.  The edge of the shadow then begins where the light rays are at a tangent to the surface of the sphere.

Since light will only travel in a straight line, it therefore cannot reach around more than halfway on a round form.  If we have an established direction of the source of light, we can then approximate the place where the shadow begins on the sphere- that is halfway around the form from where the highlight is.

In regards to realistic modelling, the right angle is essential.  The light will fall onto the object at a right angle, that is straight on it from the source.  As an illustrator, consider where your image situates the viewer relative to the sphere you are representing, and in your mind travel half-way around from the point where the light is striking it.  This is the edge of the highlight circle.  At that point, represent the “illustrator’s hump” (a deepening of tone at the transition from light to dark) and model the remaining area as in shadow.

Consider this drawing I did below: 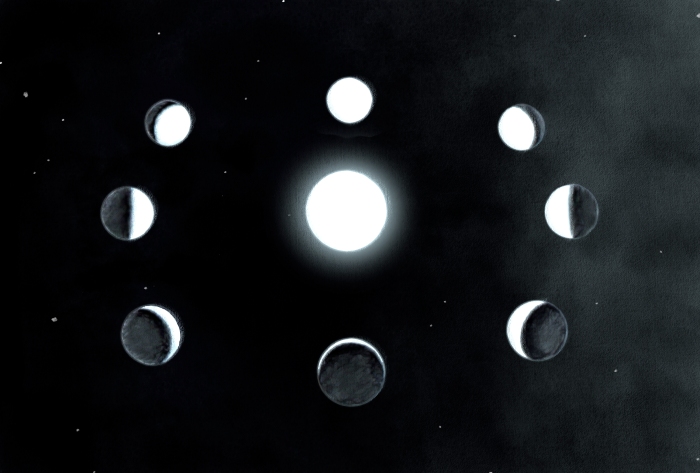 The light from the  central ‘sun’ goes out, falling on the surrounding 8 spheres in a straight line.  Where the surface of each sphere is closest, at a 90 degree angle to the sun, the circular highlight appears.

If we consider the top sphere, directly above the sun at 12:00 to be Sphere 1, you can see that the highlight upon it’s surface is a complete circle.

Going clockwise to Sphere 2 shows the circular highlight, partially obscured by the actual form of the sphere.  This shows us the curving side and the area of halftone. The highlight is still mostly a circle.

Further along, at Sphere 3, the closest point to the sun is perpendicular to our point of view, so the edge of the highlight is what can be seen, showing a very shallow curve.  This position shows us the dark and light sides of the sphere at the same time

Sphere 4 is the crescent moon shape, which is actually an illusion.  In this case the sphere is beginning to be between our point of view and where the light is, so that most of the circular highlight is obscured by the shape of the sphere.  On the other side which we can’t see, it is a full circle still.  We see only its edge.

Sphere 5 is when the sphere is directly between us and the light source.  We are only able to see the very edge of the highlight at the top, on account of the fact this image’s perspective is slightly from above.  In the case of an eclipse, we see no light at all.

The sphere is the first form to memorize, and with a bit of review, I am certain you can hold the principle in your head, and be able to represent a sphere with light striking it from any angle.  I encourage you to practice this, until you can model the light from any side convincingly on a sphere.

Next posting will move further into how to represent light on form from memory.