There will be more notes for this lesson, so take down what you consider to be valuable.  In addition, this lesson will introduce your first drawing assignment, so get your sketchbook out, and your pencil sharpened. Let us commence.

The sixth part of this lesson breakdown is regarding the use of the nude human form as the basis for figure study.  Loomis again underscores that knowledge of the muscles, bones and flesh on the nude figure will inform the artist’s approach to drawing the clothed figure.  He states:

It is impossible to draw the clothed or draped figure without a knowledge of the structure and form of the figure underneath.  The artist who cannot put the figure together properly does not have one chance in a thousand of success-either as a figure draftsman or as a painter.

Loomis now makes a point which I have used in several instances regarding those who associate artistry with some sort of magical talent which is bestowed from above.  Loomis states that nobody would accept a person’s claim to being a surgeon, if they also admitted to have never studied anatomy.  Likewise, we will reject a man’s offer to tinker on our automobiles, if he has no knowledge of mechanics.  We don’t accept the idea that someone could be imbued with a natural, unstudied skill of surgery or mechanics, because the end results of such uninformed work is disastrous – even fatal!  The producing of good art is not a life & death matter, but it should be regarded as important on principle for the sake of elevating quality over mediocrity.  To regard the production of art as something without the need for legitimate, specific study is to lower the standard of the medium, which (at the very least) promulgates the ugly.

Next, Andrew Loomis tells us that having a squeamish reaction to the nude human form will bar you from being an artist.  He states:

If you are offended by the sight of the body the Almighty gave us to live in, then put this book aside at once and likewise give up all thought of a career in art.

He goes on to indicate that any informed person who has technical knowledge of anatomic detail understands that the male and female forms differ radically in their construction.  Loomis advocates that the study of the nude form is indispensable to any career in art associated with figure drawing.  Again, he associates a career in art with a career in any of the vocational trades by stating that coursework in a practical trade eschewing  the study of the basic terms of that trade is a deplorable waste of time.  The terms of the vocation of illustration is the human figure, and we are to study it with the assiduity of a technician.  Consider this quote:

…a woman in slacks is not a man in pants, even when she has a short haircut

What Loomis means is that the dressings of femininity do not make womanhood.  There are many anatomical and skeletal differences- structural differences, all of which must be acknowledged and precisely understood by the artist, lest his representation fails to be convincing.

The next section provides an overview regarding the two types of drawing; these being the Linear Approach and the Solid Approach.  Loomis goes on to articulate the differences in these types.

It is important that Loomis is not separating line drawing from rendered drawing.  He indicates that drawing with expressive line work in order to describe 3-D form is also part of the Solid Approach.  He acknowledges that an outline truly belongs in the category of flat rendering- the Linear Approach, but he makes the distinction between a contour and a line.  Loomis associates a line with a piece of wire, unexpressive, regular in dimension and even.  A contour is an edge, which may be a sharp limitation to the form of a subject (such as in the edges of a cube) or a rounded a vanishing limitation (such as the contours of a sphere)

The difference is that in the Solid Approach, the line-like contours pass in front of one another, whereas an outline done in the Linear Approach does not do this.  A simple way to think of this is to imagine a naive drawing of hills.  The undulating lines interrupt one another to create the illusion of depth, even in children’s drawings.  This is still the Solid Approach, even though it consists of only contours.

The key element Loomis is implying here is that a convincing contour drawing of the human form  will also account for depth in anatomy by the use of interruption.  To help visualize what he means, Andrew Loomis asks us to imagine a piece of wire, meticulously bent in a continuous outline of a human being.  Even if the wire accounted for every hair, bump and point on a body, the continuous nature of the wire would never convince us that the representation of a human had any depth to it.  It would read as an outline.  This phenomena is not because of the lack of internal details, or because of the line-like form of the wire.  It is because there is no interruption in the line.   The recording of detail comes off as elements of design rather than information about mass or form.  Without interruption of line, we as viewers are given no clues about the three-dimensionality of the figure.  For all it’s worth, the representation could be a silhouette.

I have drawn a nude figure using the Solid Approach Loomis calls the contour drawing.  There is very sparse use of feathering and hatching.  To draw a contour drawing with convincing sense of mass means you need to understand anatomy very well, and know where to apply subtle variations in the line weight as well as to use the principle of interruption. Here is my drawing.  I want you to try and find places where I interrupted the contour line, in order to show the viewer that certain parts of the anatomy are more forward in the illusion of depth described by my line-work.  Take a look.

Now, I am going to show you two major ones, which to me stand out the most.

Are those locations which you noted as examples of contour interruption?  Where a woman’s hip bones curve out from the anatomy, show the prominence by interrupting the curvature of her side with that of the buttocks. There are several more in the drawing.  For a final example, I’d like to direct your attention to her arms.  Take a look, and see if you can spot some more contour interruptions there.  I will show the answer below. 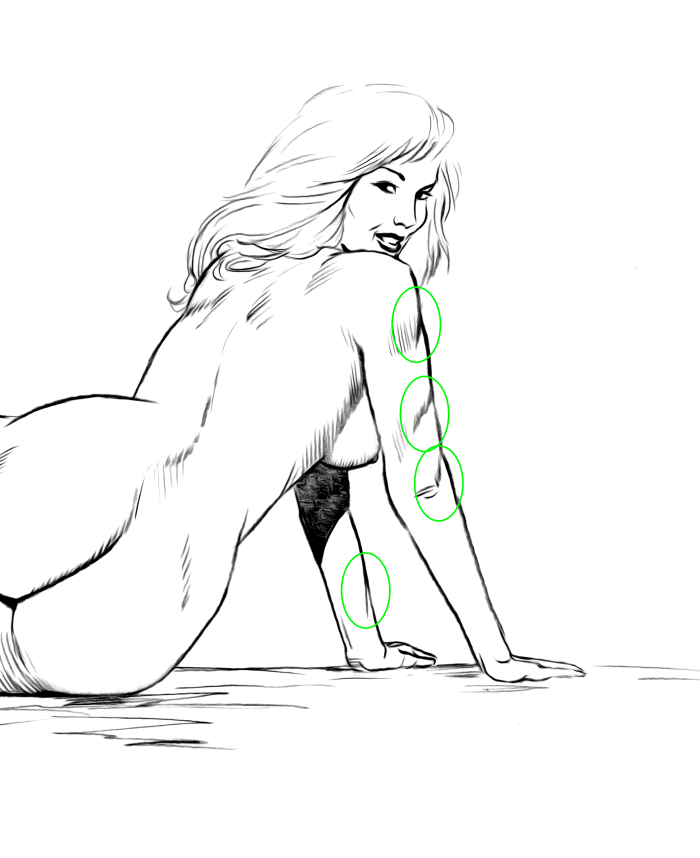 There are many more places where the contour interrupts in my drawing.  Study the full picture, and try to observe how the masses appear to be describing depth, simply by having one contour line cross over the other.

This will conclude lesson five.  Please take the time to copy your notes, and as your first assignment, take a section of this woman’s anatomy which features interrupted contour, and recreate it in your sketch book.  It may be worth while to try several parts of the anatomy, or even the entire drawing for more advanced students.

Thank you for reading.  I look forward to seeing  you next week.

jesswhitecomic I am a comic illustrator, and an advocate for clear thinking and rationality.
Published April 20, 2020April 26, 2020